You are here:
Back to Western Metro

On 30 August 2018, there was a large industrial fire in Tottenham. The fire broke out at a warehouse at 420 Somerville Road (the site). People sometimes know this fire as the West Footscray industrial fire. 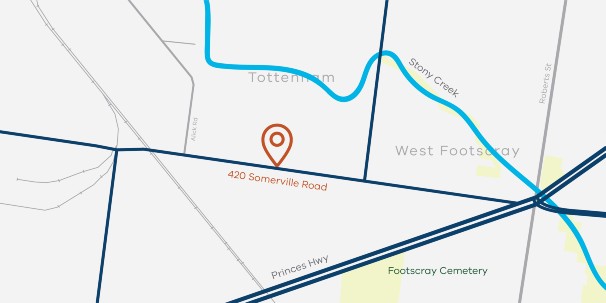 How we responded to the Tottenham industrial fire

EPA was a support agency while the fire was burning. We monitored the local area’s air and water quality. We also informed emergency personnel about risks to human health from the fire.

The site’s stormwater drains are now plugged. This means no onsite stormwater leaves the site and flows into nearby Stony Creek.

EPA has been working with Melbourne Water, Maribyrnong City Council and other agencies to oversee safe removal of contaminated silt and sediment from Stony Creek downstream from Paramount Rd. The removal of contamination from the fire is now complete and it's time to focus on the long term rehabilitation of the waterway.

During the incident contaminated firewater from the fire site flowed into nearby Stony Creek. A range of chemicals entered the creek. EPA has been testing the water since the fire and throughout the recovery. No exceedances of human recreational water quality guidelines were observed during the extensive removal of the sediment downstream of the fire site. This suggests that mobilisation of contaminants was well managed and minimised during the works. No exceedances of human recreational water quality guidelines values have been identified since shortly after the fire in 2018 and for this reason it is now considered safe to remove the precautionary signage placed along the waterway during the incident.

Working together towards rehabilitation

Find out more about our Tottenham industrial fire response