You are here:
Back to Officers for the Protection of the Local Environment (OPLEs) 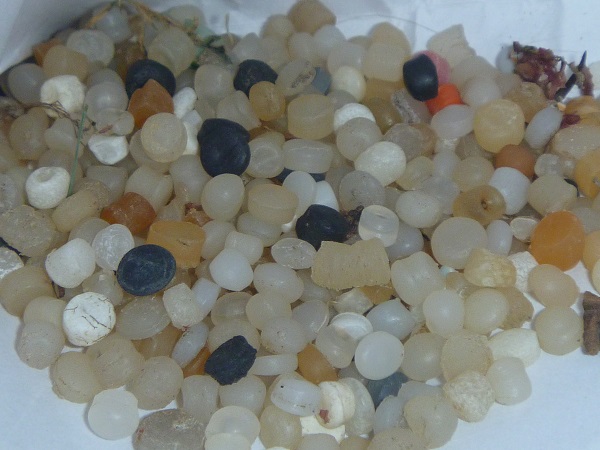 Nurdles are small plastic pellets used to produce plastic products. They can be difficult to manage as they are small and light weight. They can easily be swept up by wind and find their way into the stormwater system and out to sea. Nurdles can pollute our oceans and endanger sea life.

OPLEs from Wyndham, Kingston and Dandenong received reports about several key industrial sites, and problem areas at local creeks where nurdles had been found.

These reports had come from local community members, as well as Tangaroa Blue, a not-for-profit organisation dedicated to preventing marine debris. Tangaroa Blue conducted an audit of industrial sites across Melbourne, inserting equipment into stormwater drains known as ‘drain buddies’ to catch and record nurdles escaping into the stormwater system.

In Wyndham the OPLE conducted several inspections over two key sites in the local government area, providing guidance and information to manage nurdles and worked with site staff to improve their practices. The OPLE was able to gain voluntary compliance from one of the sites but was required to serve a notice to implement further improvements at the second.

“It was clear that nurdles were being blown into gutters and finding their way into the stormwater system at both sites, there were several issues related to storage and handling of the nurdles that needed to be addressed,” said the Wyndham OPLE. “Thanks to the drain buddies and Tangaroa Blue’s audit, I was able to show the site managers the extent of the problem, which was eye opening for them. We were able to see a reduction of nurdles captured by the drain buddies as site practices improved.”

Similar site visits and guidance provision have been made in Dandenong and Kingston and work continues in these areas. “Managing nurdles does require a good strategic management plan as they can escape from many sources along the supply and production line,” said the Dandenong OPLE. “In most cases we’ve been able to build constructive relationships with businesses over several visits to support them to comply with their obligations.”

Find out how businesses can help prevent small plastics pollution.